Growing with its Challenges

With a new Prime Minister at the helm, Malta confidently looks to the future in spite of the coronavirus pandemic that is affecting and challenging countries in Europe and beyond.

Malta attracted many admirers for its success in transforming a once British military outpost into what would become one of Europe’s best performing economies. While tourists have for years flocked to the island’s Mediterranean shores to soak up its 300 days of sunshine, they were quickly followed by growth-minded internet entrepreneurs and multinationals which were attracted by the country’s pro-business attitude, EU membership and low operating costs. Encouraged by its early success, Malta intensified its economic strategy and diversified into a wide range of business areas from manufacturing, financial services and iGaming to more controversial areas such as citizenship by investment and, more recently, medical cannabis, all of which helped propel Malta to be held up as an EU model of economic success. Despite the accolades and its remarkable achievements, the country attracted controversy following a series of major corruption allegations, which have tarnished the island’s reputation. Robert Abela, Malta’s new Prime Minister, has promised a new departure for the country, vowing to repair Malta’s international image and to ensure past mistakes are not repeated. Robert Abela’s leadership skills were immediately tested when the island recorded its first coronavirus infections at the beginning of March 2020. Malta adopted a step-by-step response to the outbreak, which led to a partial lockdown and has so far proved effective in slowing down the spread of the virus, although the pandemic’s full impact on the country and its economy is not yet known.

Malta is not a big country by any measure, in fact, with an area of just over 300 square kilometres, it is the smallest member state of the EU. Located at the centre of the Mediterranean, between Europe and Africa, Malta has been influenced by centuries of foreign rules by various powers, each leaving a unique imprint on Maltese life and making the island incredibly distinctive – a place unlike anywhere else in the world. English is one of Malta’s official languages, Maltese, the only Semitic language to be written in the Latin script, being the other. Valletta, surrounded by the sea on three sides, is without a doubt one of Europe’s most beautiful capitals. The city was recently given a makeover to revive its cultural, social and economic scene, and while Valletta has lost none of its century- old charm, these days it feels like an exciting new city. In many respects, modern day Malta can be best described as a cosmopolitan village. Attracted by career prospects and a unique island lifestyle, foreign talent flocked to Malta in recent years like never before. The country today has one of the highest expat populations in the EU, while the number of people living on the island is now surpassing the half a million mark.

Slow but steady economic growth had been Malta’s mantra for many years. As a small nation, Malta was always very outward-looking, but the island’s decision to join the European Union in 2004 opened it up to more markets around the world. Malta transformed itself into a competitive economy based on a host of exportable service industries and is winning investment from global corporations. Determined to make the best of the new opportunities, Malta pursued powerful sector-development plans in industries such as tourism, financial services, maritime, aviation, gaming as well as transport and logistics, which helped it emerge as Europe’s newest tiger economy with average annual growth surpassing the 7% between 2013 and 2018. The economy doubled in size, leading to record-low unemployment, repeated budget surpluses and the highest decrease in debt in the EU.

However, rapid growth comes with its own set of challenges, and Malta hit some major stumbling blocks along the way. The country’s economic results have been overshadowed by allegations of corruption, money laundering and tax evasion, as well as the assassination of investigative journalist Daphne Caruana Galizia in October 2017, which certainly was the darkest moment in Malta’s recent history. Her murder marked a turning point for Malta as the eyes of world turned towards the island. Questions started being raised about the rule of law in the country, as well as the island’s ability to fight economic crime and political corruption. International institutions and anti-money laundering bodies, including the European Commission, OECD, IMF, Moneyval and GRECO, started to look at Malta and found that beneath the surface there were some major structural deficiencies and serious shortcomings in the country’s system of checks and balances. There was consensus though that Malta’s institutions lacked the capacity and resources, both human and financial, rather than the willingness, to control and supervise businesses effectively. The island’s regulatory, supervisory and law enforcement infrastructure had not been expanded as it should have been and had fallen behind an economy that had grown not only in size and volume but had also reached a whole new level of complexity. There is no doubt that Malta was slow to acknowledge the need to improve and take immediate action. However, Joseph Muscat, twice elected as prime minister and widely credited for Malta’s economic miracle, came under intense pressure as the investigation into the murder of Daphne Caruana Galizia gathered pace in late 2019, with some of his inner circle allegedly being implicated. In tandem with the international institutions, the people of Malta demanded change and took to the streets. Muscat shouldered the responsibility for the shortcomings of his administration and stepped down, giving way to Robert Abela who took office on the promise of implementing the necessary reforms without delay. His government has completely acknowledged the criticism, accepted all the recommendations of international bodies and is updating and upscaling the island’s institutional framework to ensure that past mistakes will not be repeated.

Malta’s regulatory authorities, as well as the country’s law enforcement authorities, are all undergoing a complete root-and-branch overhaul, with heavy investment in technology, people and new procedures. Although the revelations were shocking for a country that was previously held up as a model economy and an example of good governance in a region where bribery and corruption are not unheard of. They did serve as a wake-up call and presented Malta with an opportunity to better itself. The island wants to abide by the highest standards and has sought advice from foreign consultants and leading experts, and in some areas, Malta will likely go above and beyond what is required. Many believe that the past events, and, more importantly, the resulting change will ultimately strengthen the country’s business infrastructure, renew its appeal as investment location and prepare itself for the next phase of its development.

While Malta’s economy was projected to be again the best-performing EU economy in 2020, with a GDP growth rate of 4%, experts said that the outbreak of the coronavirus and the resulting economic slowdown mean the island’s economy could shrink by up to a half in 2020. To cushion the economic fallout and to support the island’s most affected businesses, Malta’s Government has assembled an unprecedented financial aid package with a primary focus on job retention. 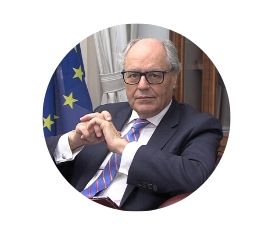 "We know that we have a very short window of opportunity to correct any past mistakes and regain our international credibility. We have been diligently doing our homework, and we have significantly strengthened our regulatory and crime-fighting agencies, and in some instances, we are doubling the workforce of our regulatory authorities, while investing in technology and the latest supervisory tools. Despite the challenges we are facing, we will remain one of the top economic performers in the European Union."

While outside impressions of what’s happening in Malta are sometimes distorted, the island’s strengths should not be underestimated. Malta remains one of the most competitive choices in the EU and a profitable business hub, which is reflected in the number of companies and international brands that operate from the island. Companies such as Lufthansa Technik, Playmobil, HSBC, Aon, Munich Re, CMA-CGM and VistaJet have been based in Malta for many years and are among the companies that continue to reinvest on the island. New business is also flowing in. Betting giant Bet365 has recently began locating its operations to Malta, while luxury hotel chain Hyatt is setting foot on Malta. An important factor that contributes to Malta’s past and current success as a business location is its EU membership, which gives companies based in Malta access to the rest of the single market. But the island’s connections go far beyond that, and Malta is an ideal jumping-off point for accessing growing markets in Africa and the Middle East. The authorities have also put in place a number of incentives to attract high-flying talent to the island, with one the most successful measures being the introduction of a fat personal tax rate of 15% for highly qualified professionals.

Beyond its established industries, Malta is nurturing new economic activities and targeting sectors in which it believes it can excel, sectors that are niche in nature, but in which Malta can become a world leader. The island – the first EU country to pass regulations for blockchain solutions in 2018 – has big ambitions in attracting companies engaged in advanced technologies such as Artificial Intelligence, big data, Internet of Things and Distributed Ledger Technologies. Malta is equally embracing the nascent medical cannabis sector and brought in regulations for this category of rapidly emerging therapies. The clear vision is not merely to attract in producers of cannabinoid-based pharmaceutical programmes, but also their clinical and laboratory research arms. Furthermore, Malta made no secret of its ambition to keep on building on the success of its other sectors. The island is becoming the high flyer of Europe’s aviation industry as increasing numbers of aviation companies locate to Malta, and aircraft leasing, finance and chartering have been identified as priority areas for the next phase of the sector’s development. Malta has also carved out a niche for itself in the global entertainment market. While 300 days of sunshine, beautiful landscapes and architecture have long made it a firm favourite of the global film industry, the island is garnering interest from the games development and video gaming industry.

A Journey of Many Firsts

Malta’s development over the past years has been a journey of many firsts. The island was never afraid of thinking big and setting itself ambitious targets. Its small size allowed the country to nimbly navigate through difficult periods and react quickly to changing circumstances. While the effectiveness of the reforms that are currently being implemented will determine Malta’s future to a large extent, the country’s ability and willingness to grow with its challenges will go a long way towards giving comfort to its partners around the world and help it overcome its current troubles.